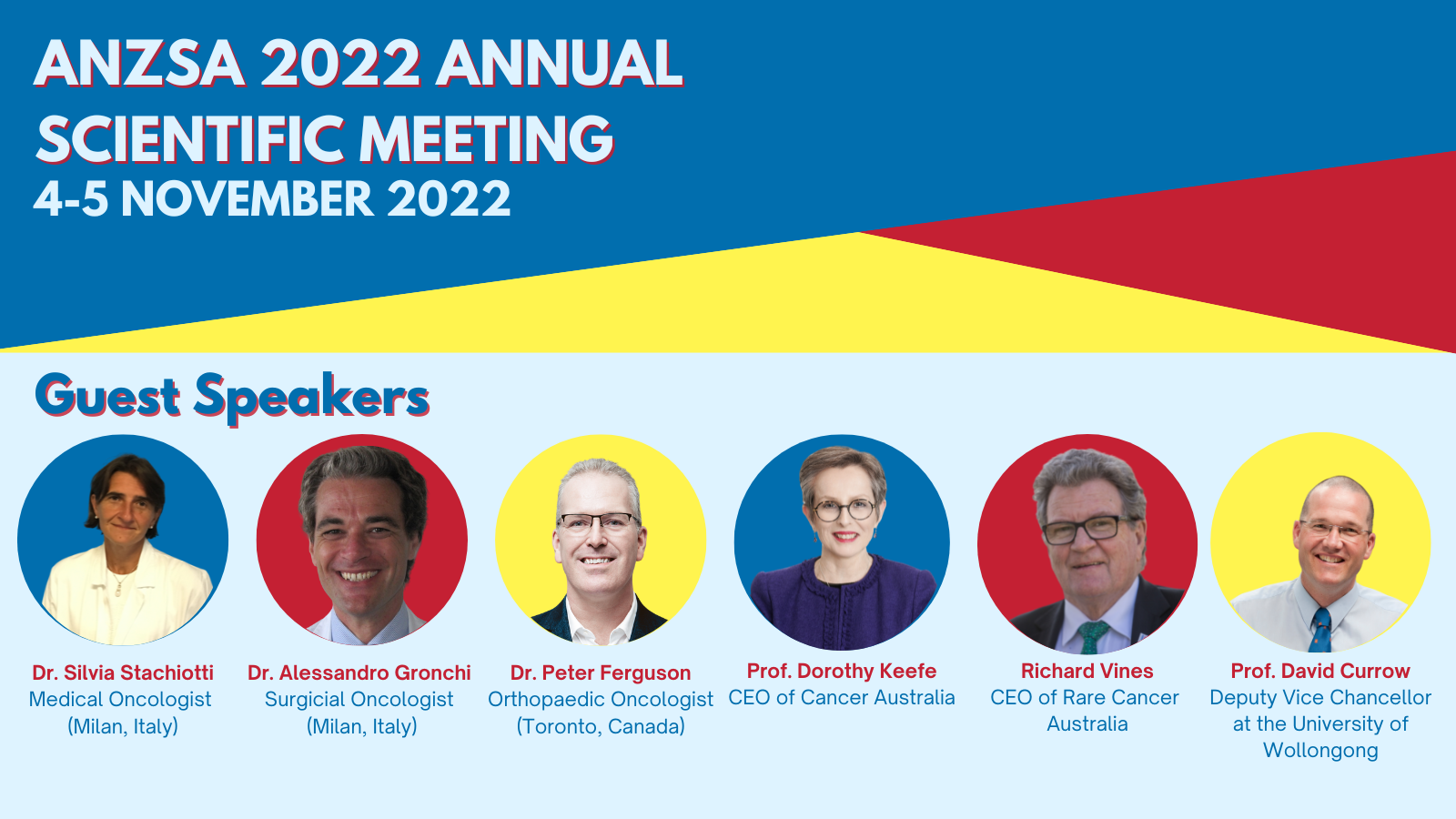 At the 2022 Annual Scientific Meeting, we are fortunate to have both local and international guest speakers who will be discussing their works in the sarcoma field.

Professor Dorothy Keefe has led Cancer Australia, Australia’s national cancer agency, since 2019 and has just been reappointed for a second three-year term. Prior to this she had a long and distinguished career as a medical oncologist at the Royal Adelaide Hospital (RAH), and as Professor of Cancer Medicine at the University of Adelaide, where she remains an Honorary Clinical Professor.

She is working clinically one session per week at the RAH as a volunteer during the COVID surge. Her long-term research interest is in Supportive Care in Cancer. She has led cancer services at all levels, as well as health reform in South Australia. She has a Master’s degree in Medical Leadership and a strong interest in advocacy, career development and mentoring.

She is committed to patient-centred care, reducing unnecessary variation in cancer outcomes, and to improving outcomes for Aboriginal and Torres Strait Islander people affected by cancer. During her tenure as CEO, she has led the enquiry into Lung Cancer Screening for Australia and is leading the development of the first national Australian Cancer Plan.

Richard and his wife, Kate established Rare Cancers Australia (RCA) in June 2012. The not-for-profit provides support to all Australian patients diagnosed with a rare or less common cancer - because rare does not mean you have to be alone.

Richard is a carer and passionate advocate as he has experienced first-hand the lack of information, resources, support, research and treatment options available for patients, carers and families living with a rare or less common cancer, following Kate’s diagnosis of Medullary Thyroid Carcinoma in 1991.

He knows the power of lived experience and pairs this with his extensive experience and expertise in the business and not-for-profit sectors to partner with patients, experts and industry to improve the lives and outcomes of patients with rare and less common cancers.

A graduate of the University of Melbourne where he studied maths and statistics, Richard initially trained as an Actuary and worked in IT for several years, forming his own software company which he then sold in 1990 before embarking on a second successful software venture in Europe.

Richard returned to Australia in 1996 where he was retained by an American company to establish a presence in Australia. In 2001, he left the IT industry to work in a number of not-for-profits associated with politics and health, before establishing RCA where he currently holds the roles of Chair and Chief Executive Officer.

His strong advocacy achievements in policy reform around research and access to treatments, wide influence and significant expertise have also led to Richard taking on several other leadership roles within peak oncology and research bodies including:

Richard also serves as an associate investigator on a number of research projects and is a highly sought after speaker and spokesperson for cancer patient advocacy issues, both in Australia and across the Asia Pacific region.

Professor David Currow is the Deputy Vice-Chancellor (Health and Sustainable Futures) and  Interim Deputy Vice-Chancellor and Vice President (Research & Innovation) at The University of Wollongong.  He is the former Chief Cancer Officer, New South Wales and the Chief Executive Officer of the Cancer Institute, NSW, the state’s cancer control agency. The agency responsible for prevention, screening, improved cancer services, and funding of research infrastructure. Before this, David was the foundation Chief Executive Officer of Cancer Australia, the Australian Government’s cancer control agency.

David is a widely published academic with research in symptom control, population burden of symptoms and health services research. He held the chair of Supportive and Palliative Care at Flinders University and more recently of Palliative Medicine at the University of Technology Sydney. David co-founded the Australian National Palliative Care Outcomes Collaboration (the first point-of-care national data collection for quality improvement in palliative care in the world) and the principle investigator of the national Palliative Care Clinical Studies Collaborative (the world’s largest phase II and III clinical trials team in palliative care globally).

Alessandro Gronchi MD received his MD degree from Milan University in 1992, completed his residency training in General Surgery in 1997 and a fellowship in Surgical Oncology in 1998. He holds the National Scientific qualification for full professor of General Surgery. He is chair of the Sarcoma Service at the National Cancer Institute – Milan – Italy since 2001.

He runs the institutional Sarcoma Data Base, which gathers information on over 10000 patients affected by soft tissue sarcoma (STS), desmoid-fibromatosis (DF) and GIST, treated over the past 3 decades in Milan. He is involved in all institutional research activities on sarcoma, which include neoadjuvant therapies in extremity and retroperitoneal sarcomas, new targets for specific STS types, genomic characterization of DF and mechanisms of resistance to therapy in GIST. He is the Principal Investigator of several Italian and International trials on STS, DF and GIST.

She works in the Adult Mesenchymal and Rare Tumor Medical Treatment Unit, Cancer Medicine Department. at the Fondazione IRCCS Istituto Nazionale Tumori (Milan, Italy) where she is involved in all institutional research activities on sarcoma, with a special focus on ultra-rare sarcomas.

Her work focuses on the identification of new treatments and treatment modalities for adult patients affected by sarcomas. As sarcomas are rare tumors and the sarcoma family comprises >80 different histologies, over the last 20 years she has been working in collaboration with the Institutional groups and the international sarcoma community and patient advocates to improve cure and care of selected sarcoma types through the 1) description of the natural history and sensitivity to conventional agents available for treatment of sarcoma; 2) identification of new targets, mechanisms of resistance and anticancer agents, 3) design of prospective clinical trials, 4) coordination of consensus meetings with the community of experts to draft clinical guidelines on the best approach to each sarcoma type; 5) interaction with the regulators (FDA; EMA) to help the approval of new drugs for sarcoma patients; 6) build prospective registries / observational studies.

She is the faculty coordinator of the Sarcoma group of the European Society for Medical Oncology (ESMO) and the subject editor of the ESMO guidelines committee for sarcoma and GIST. She is the chair of the systemic therapy subcommittee of the EORTC Soft Tissue and Bone Sarcoma Group. She is member of the advisory boards of Alleanza Contro il Cancro (ACC) and of the Federazione Italiana Gruppi Cooperativi (FICOG).

She collaborates with several sarcoma Patient Advocacy Groups (PAG), among which the Chordoma Foundation, the Epithelioid Haemangioendothelioma (EHE) Rare Cancer Charity UK (EHERCC)  the EHE Foundation US, the Desmoid Tumor Research Foundation, the Leiomyosarcoma Foundation, in which she serves as a member of the corresponding medical advisory boards.

Peter Ferguson is an orthopaedic oncologist and the Albert and Temmy Latner Professor and Chair of Orthopaedic Surgery at University of Toronto. He is the head of the largest sarcoma site group in Canada at Mount Sinai and Princess Margaret Hospital's, and the past President of the Canadian Orthopaedic Oncology Society.

He has won numerous teaching awards including the Robert Salter Award from the Division of Orthopaedic Surgery, the Bruce Tovee Undergraduate and Postgraduate Awards from the Department of Surgery, the WT Aikins Award from the Faculty of Medicine, twice the Award for Excellence in Postgraduate Medical Education at the University of Toronto and the AMS Donald Richards Wilson Award by the Royal College of Physicians and Surgeons of Canada.

He has authored over 170 publications in clinical outcomes of patients with sarcoma, surgical education and translational research in radiation effects on bone and soft tissue healing.